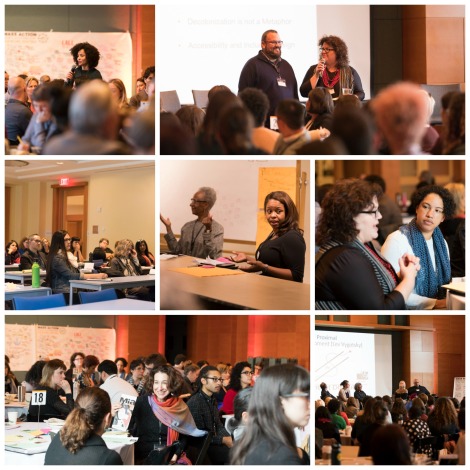 In October 2018, I attended the third convening of MASS Action (Museum as Site for Social Action) and I welcomed the chance to spend three days with inclusive thinkers and practitioners in the museum field. I also eagerly accepted the opportunity to speak about the Abbe’s work alongside my colleague, Ben Garcia, with the San Diego Museum of Man.

MASS Action describes itself this way:

This collaborative project seeks to align museums with more equitable and inclusive practices. As the museum field begins to shape its identity in the 21st century, MASS Action poses the following questions for practitioners to consider: What is the role and responsibility of the museum in responding to issues affecting our communities locally and globally? How do the museum’s internal practices need to change in order to align with, and better inform, their public practice? How can the museum be used as a site for social action? Through a series of public convenings and the creation of a toolkit of resources, this project’s intention is to share the strategies and frameworks needed to address these important topics.

While I wrote about MASS Action after I attended in 2016, this visit felt different. This time I arrived as a practitioner with a solid six years under my belt working to understand decolonizing practice and to dismantle racism in museum institutions. As my emotional response to the speakers and activities built, and as I deepened my thinking, I was reminded how much I still need to learn (and that I need to make sure I create learning spaces to do that). I felt and knew that no matter how much we’ve accomplished, we’re just getting started at the Abbe.

Of the over 200 colleagues assembled in Minneapolis, many of them were literally taking their very first steps toward being inclusive by attending MASS Action. They possess very little bench strength around inclusive museum practice in their institutions and many of them are shouting into the abyss because leadership is not leading inclusively and making change a priority. Museum leadership is not recognizing they are at the helm of knowledge-producing institutions that are structured by dominant society and that serve to perpetuate the status quo. As Chris Taylor with the Minnesota Historical Society shared (and I’m quoting from my hurried notes), “[museum] best practices usually support the status quo which isn’t working [for people of color]. Saying it’s easier to do something, or saying it’s traditional, is code for privilege.”

The participants, who traveled from across the U.S., Canada, and a few from over the Atlantic, were in for a shock. To engage in MASS Action is not like checking a box and saying “we’ve done that; what’s next?” It’s rather about turning a mirror on yourself, revealing your personal privilege, and identifying how the museum has built systems to re-enforce and prioritize dominant society’s privilege. Your privilege. It’s about giving up privilege, or power, to make an equitable world. It’s about never being done with the work.

If you’re shouting into the perceived abyss, you have to shout louder by walking the walk and talking the talk. You must spotlight the forces at play when decisions are being made and authority is exerted. You can use inclusive language and model behavior. And maybe, just maybe, change will begin. As Atum Azzahir, or “Mother Atum” of the Cultural Wellness Center, expressed, “Today, who did you give up your ego for?”

Thoughts and ideas are still swimming in my head some four weeks after my time at MASS Action. But I did manage to write a list of takeaways and commitments before I left Minneapolis for home.

Cinnamon Catlin-Legutko is the President and CEO of the Abbe Museum. Working in museums for more than twenty years, she believes they have the power to change lives, inspire movements, and challenge authority. A museum director since 2001, Cinnamon is a frequent presenter at national museum meetings and is often asked to comment on national museum issues. She has been the driving force behind the Abbe Museum’s decolonization initiative, working with the Native communities in Maine to develop policies and protocols to ensure collaboration and cooperation with Wabanaki people. In 2016 Cinnamon gave her first TEDx talk, We Must Decolonize Our Museums. She’s the author of Museum Administration 2.0 (2016), The Art of Healing: The Wishard Art Collection (2004), and co-editor of the Small Museum Toolkit (2012). She recently appeared on Museopunks.